Why Is the Control of Construction Site Runoff Necessary?

Polluted stormwater runoff from construction sites often flows to municipal separate storm sewer systems (MS4s) and ultimately is discharged into local rivers and streams.  Sediment is usually the main pollutant of concern.  According to the 2000 National Water Quality Inventory, States and Tribes reported that sedimentation is one of the most widespread pollutants affecting rivers and streams, second only to pathogens (bacteria). Sedimentation impairs 84,503 river and stream miles throughout the nation.  Sources of sedimentation include agriculture, urban runoff, construction and forestry.  Sediment runoff rates from construction sites, however, are typically 10 to 20 times greater than those of agricultural lands, and 1,000 to 2,000 times greater than those of forest lands.  During a short period of time, construction sites can contribute more sediment to streams than can be deposited naturally during several decades.  The resulting siltation, and the contribution of other pollutants from construction sites, can cause physical, chemical and biological harm to our nation’s waters.  For example, excess sediment can quickly fill rivers and lakes, requiring dredging and destroying aquatic habitats.

Andover’s Stormwater Department routinely inspects construction sites for proper installation and maintenance of erosion control best management practices (BMPs).  Construction site inspections range from new single-family units whose land disturbance is well below 1 acre, to the inspection of large development sites whose disturbance area can be several acres.  All new building construction requiring a building permit are required to have periodic BMP inspections.  If BMPs are not installed properly or become ineffective for any reason damaged, the project can be stopped and the owner/contractor fined.  Non-permitted work, including infrastructure and utility construction, is also inspected by Stormwater Department employees regularly.  If site BMPs are not installed properly or become ineffective, these oftentimes large-scale construction projects can be suspended and the contractor/owner fined.

In addition, construction activity disturbing 1+ acres must obtain permit coverage from the Kansas Department of Health & Environment by submitting a Notice of Intent form.  Permit coverage requires the development of a Stormwater Pollution Prevention Plan (SWPPP).  This permitting process requires a site owner to document a specific plan regarding erosion control.  Additionally, the site owner/contractor must record weekly inspections regarding the effectiveness of the approved erosion control plan.   Violations of the approved plan can result in work stoppages and/or fines.

The Andover Stormwater Department maintains a map of non-permit construction site inspections.  The interactive map allows users to find inspection sites near specific addresses, view pictures and review inspection details including inspection notes, pictures and results.  Click the thumbnail below to be taken to the full-size map. 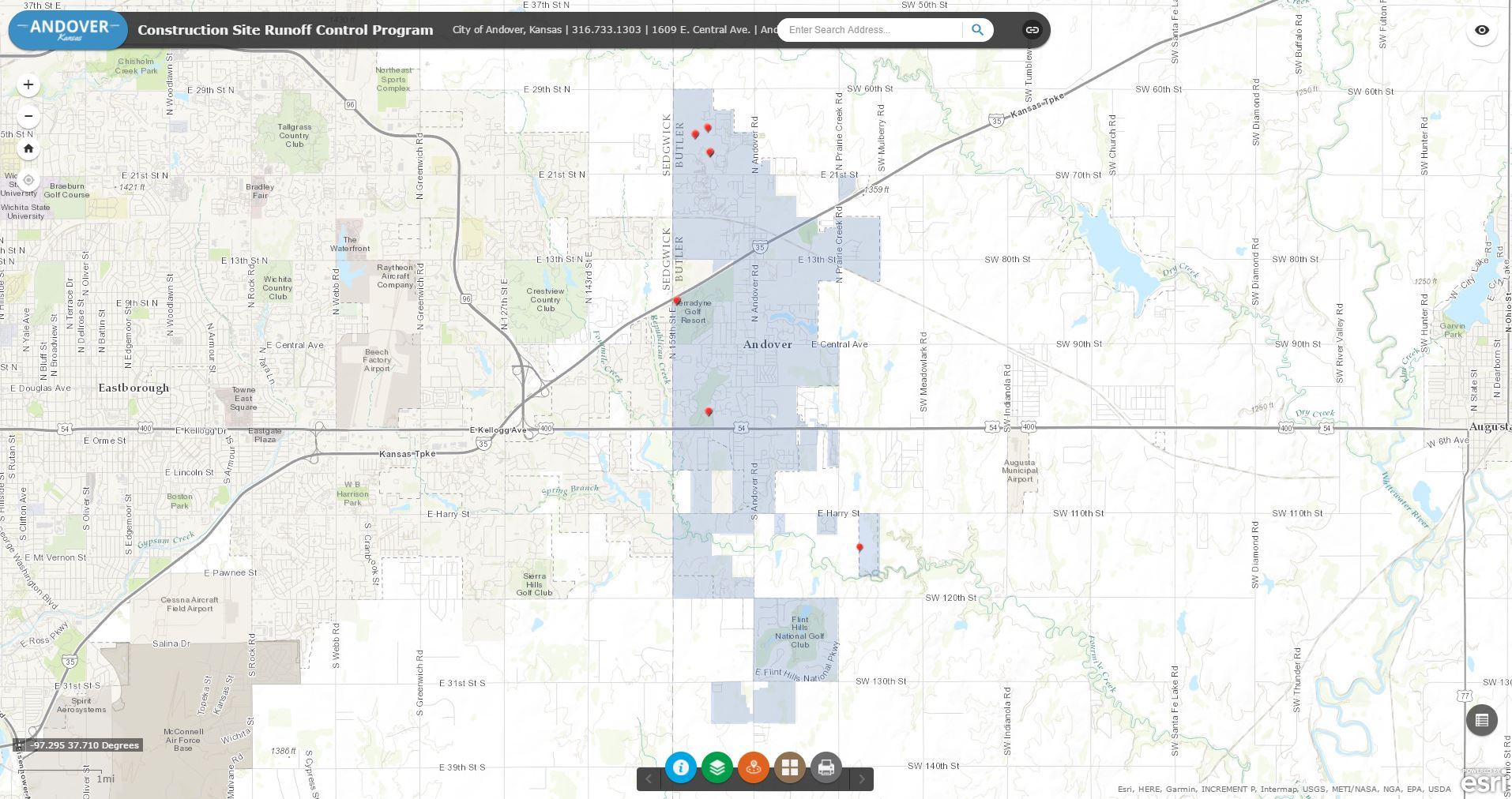 Although we are consistently monitoring construction sites for improper maintenance of stormwater runoff, we often receive calls from the public.  If you are concerned about any particular site, please call (316) 733-1303 ext. 424.  Upon receiving a concern, the City will investigate the problem and handle it accordingly.