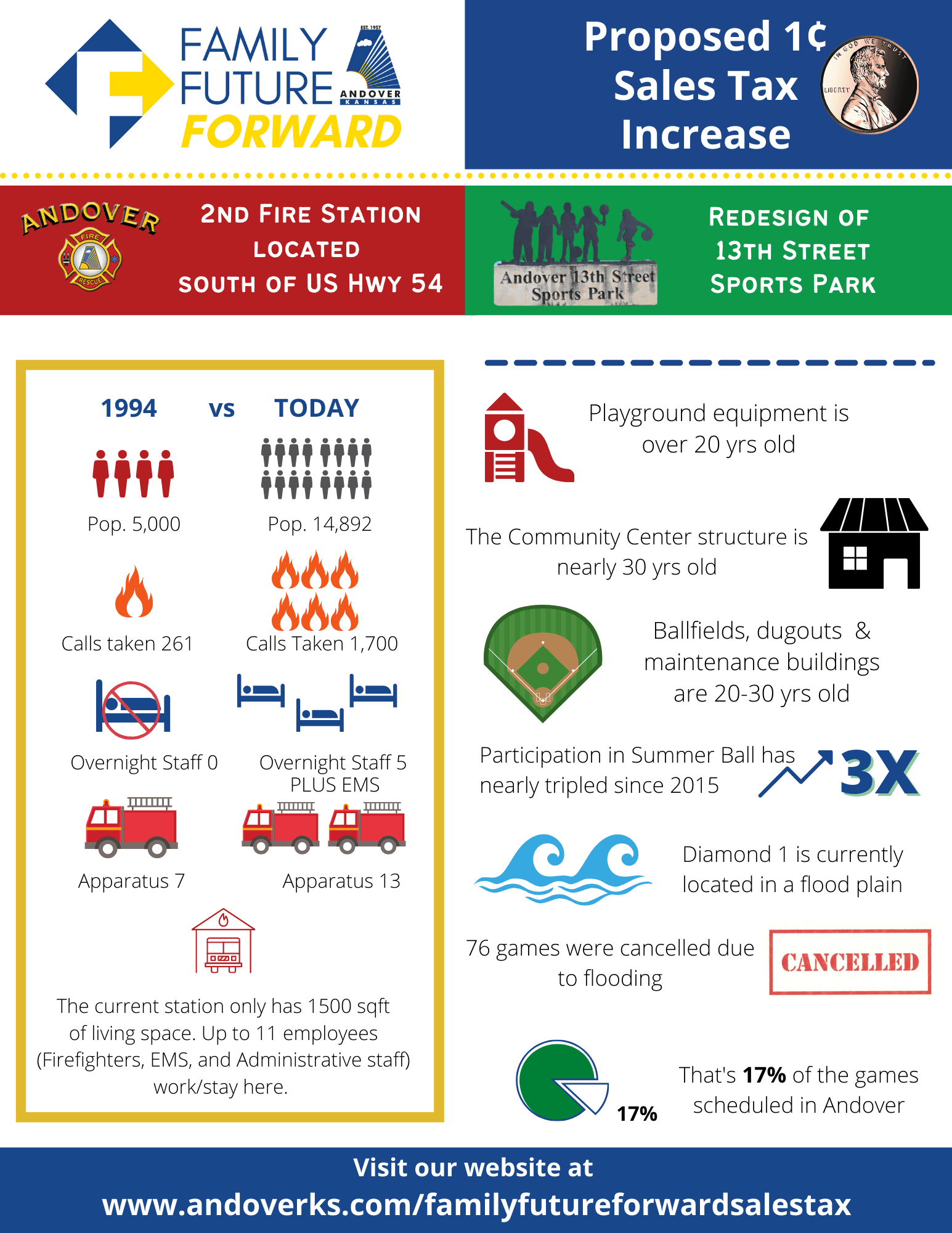 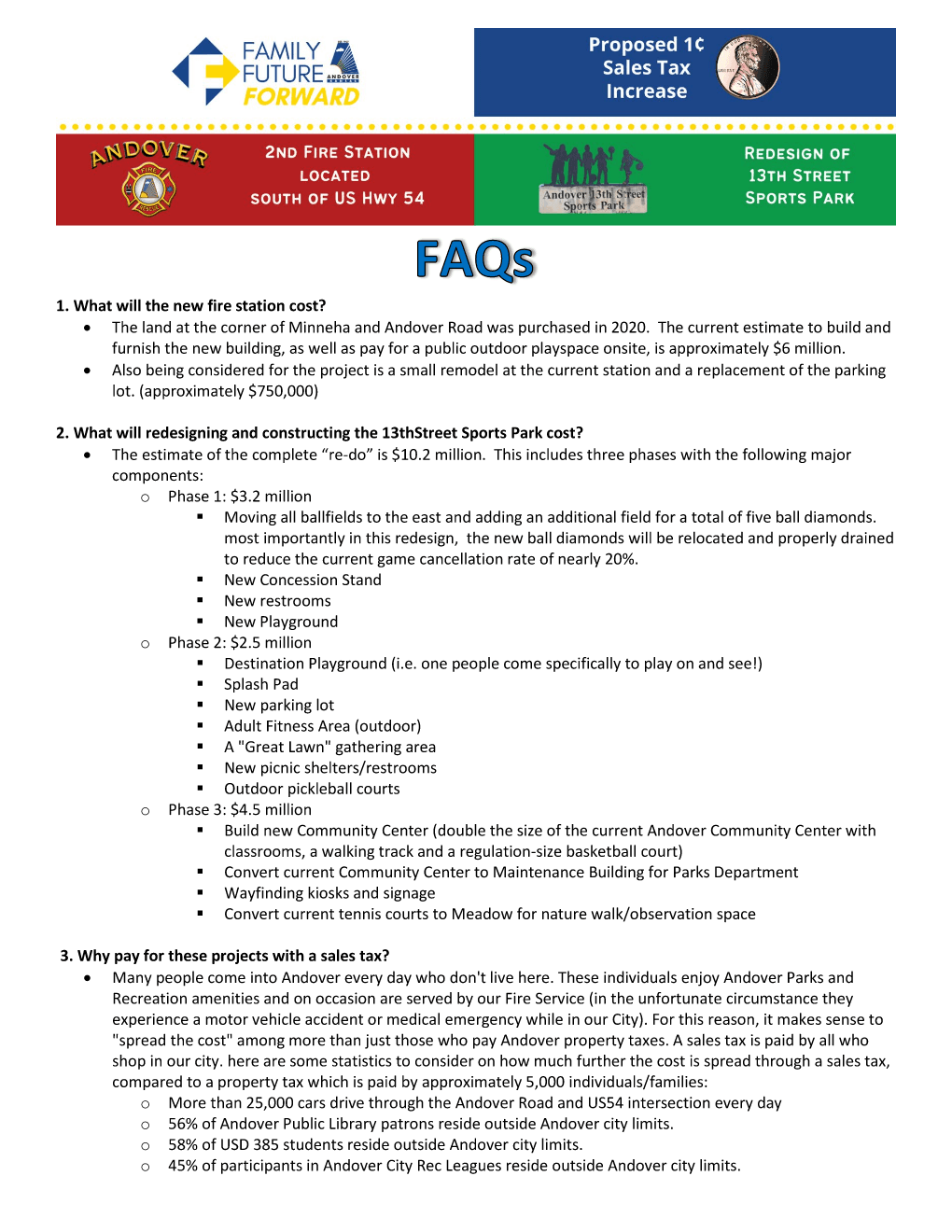 68% of Andover voters said yes to Family Future Forward on the November 2, 2021 Ballot. Therefore, starting Friday, April 1, 2022 a temporary 1% sales tax will begin to be collected, to last no longer than eight years.  The Governing Body, City staff and consultants are already busy at work designing the new fire station, the remodel of the existing fire station and Phases 1 and 2 of the 13th Street Park. Construction of the new fire station is expected to begin in October 2022. Stay tuned for more updates on these exciting city projects!

Detailed information about the projects are available below.  Click the thumbnail images on the left to view the Infographic and Frequently Asked Questions (FAQ) documents. Have a question not answered on the FAQ? Email it to cityhall@andoverks.com

The primary projects proposed to be funded include:

On November 28, 2017, the Andover Governing Body received the Comprehensive Analysis of Fire Services for the City completed by Citygate Associates, LLC .  This analysis recommended the construction of a second fire station in order to improve life-safety services within the City of Andover.

For reference, the current Fire Station #1 (1,500 SF) was constructed in 1994 when the population of Andover was approximately 5,000.  As of the 2020 Census, the City's current population is 14,892.  Andover Fire-Rescue responded to 261 calls for service in 1994, and the current annual average for service are 1,700.  Further, Fire Station #1 was not designed to house emergency personnel for 24 hours or any emergency medical service staff.  Currently, Andover Fire-Rescue is a 24-hour department and includes housing of ambulance services provided by Butler County, resulting in overnight staffing.  In 1994, the Department consisted of 7 apparatus, and the current fleet includes 13 apparatus.

Following the completion of the Comprehensive Analysis of Fire Services, Andover Fire-Rescue and multiple other City department staff evaluated multiple potential sites for the second fire station, ultimately completing the purchase of an approximately 3-acre site at the northeast corner of Minneha Avenue and Andover Road.

This new fire station will provide better response times to not only the south end of the City and eastern portion of Fire District #1, but to the entire City.  A substantial amount of the Department's response area will now be able to be reached within four minutes, which is critical once an emergency is reported.  Additionally, the new station will allow for all administrative services (Chiefs, Fire Prevention, Training, etc.) to be moved from the existing Fire Station #1 allowing more functional space and adequate living conditions for Andover firefighters.

In addition to the remodel of the current Fire Station #1, the construction of the new 12,000 square foot Fire Station #2, park amenities, including a splash park, will also be constructed on the site.

On July 27, 2021, the Andover Governing Body approved the Andover Parks & Recreation Playbook 2030 completed by Landworks Studio.  This 10-year master plan assessed the City's existing park and recreational facilities/programs, analyzed community needs/wants, determined objectives and set forth a strategic plan forward in order to enhance the quality of life services the Andover Parks & Recreation Department provide.  Based on this analysis, and the community input received, specific attention was paid to the reimagining of the 13th Street Sports Park as an adventurous destination park, including many of the needs/wants that the community expressed a desire for during the master planning process.

13th Street Sports Park's conceptual redesign sought to ensure that the park provides something for everyone, adventurous play, year-round activity, makes the most of its natural setting, and arguably most important, stays true to Andover.  The project includes three phases: