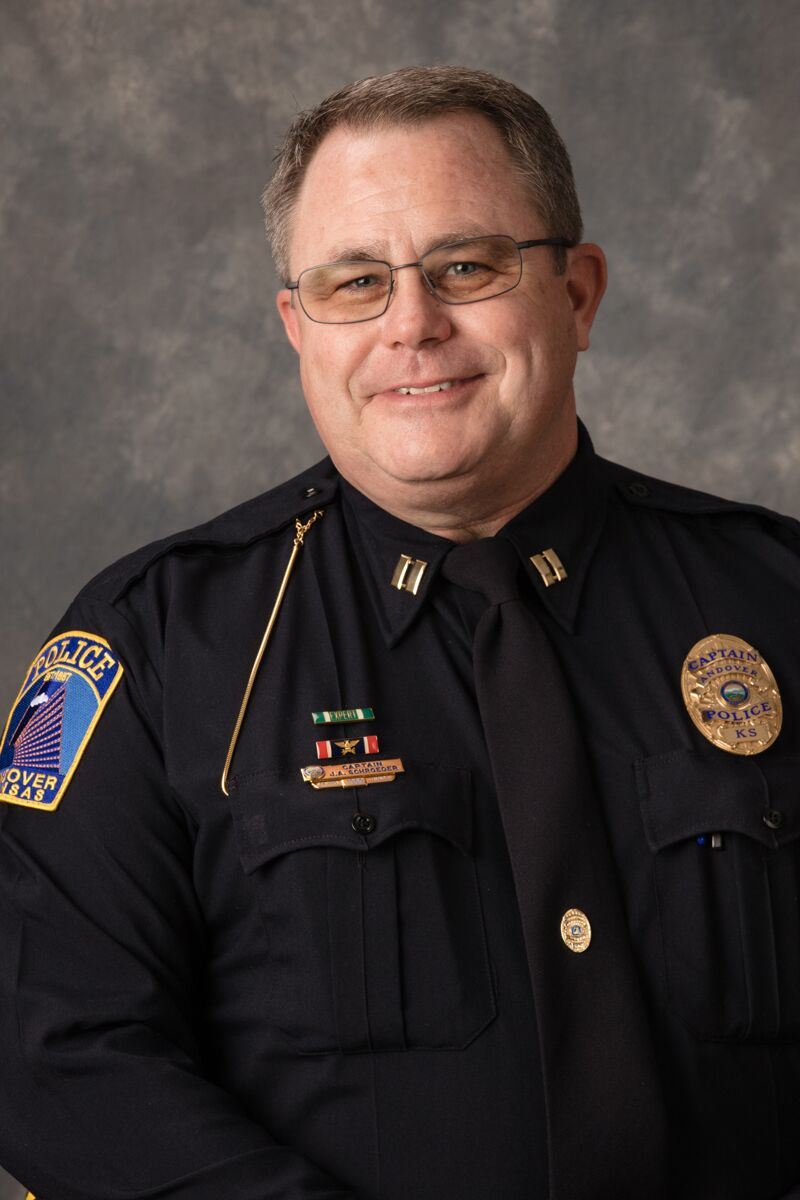 Captain Joe Schroeder started his law enforcement career with the Wichita Police Department in 1989 and served for almost 28 ½ years. During his career in Wichita, Joe served as a Police Officer, a Detective in Burglary, Financial Crimes, Auto Thefts, and was one of the first Detectives to serve in the Gang Crime Unit.  He served as a Sergeant working initially as a Field Supervisor and then in the Professional Standards Bureau (Internal Affairs).  Joe was promoted to Lieutenant in 2005 and served as a Patrol Watch Commander, Recruit Training Instructor Section Commander in Investigations, Accident Follow Up (Traffic), Robbery, Financial Crimes, and Burglary.  He also oversaw the department’s Homeland Security efforts and City Facilities Security and finished his career as the Commander of the Animal Services Bureau at the Wichita Animal Shelter.

In addition to his Law Enforcement service, Capt. Schroeder served 28 years in the military.  He served in the Air Force and the Kansas Air National Guard where he retired in2018 as the Superintendent of the 184th Regional Support Group at the rank of Chief Master Sergeant (E9).  He has held positions in the Air Force as a Firefighter/EMT in Crash and Fire Rescue, Aerospace Propulsion Specialist, Security Forces, and Command and Control Battle Management Specialist.

Capt. Schroeder initially began his career with the Andover Police Department on July 3rd, 2017 as the department’s first civilian Accreditation Manager, and then on October 8th, 2017 was promoted to Captain and assigned as the Commander of Operations where he served until February of 2020. Currently Captain Schroeder serves as the department’s “Special Services” Commander, where he directly supervises the department’s four (4) School Resource Officers and the CALEA Accreditation Manage, and oversees the day-to-day operations for all community events. Captain Schroeder’s extra duties include Recruitment & Pre-Employment Coordinator, Assistant Chaplain Program Coordinator, as well as, a member of the department’s Accident Review Committee and Training Committee.

Capt. Schroeder has a Bachelor’s Degree in Business Administration from Southwestern College in Winfield Kansas and has graduated from the US Air Force NCO Academy, Senior NCO Academy, and the Chiefs’ Executive Course.  Captain Schroeder is also a 2018 graduate of the Kansas Police Administrators Seminar (KPAS)